Holy crow! Has it really been a week+ since the last Cat File? Sincerest apologies– the days seem to just fly by lately.

Well, this week I was going to focus on Eddie, one of my all-time favorite cats ever. However, folks over at Flickr fell in love with Scruffy when we realized his potential to breed adorable Oreo-kitties with simple moth‘s Sakura. I’ll save Eddie for next time.

Don’t forget to check out the cell pic I tweeted of me and Scruffy, about 3 years ago. 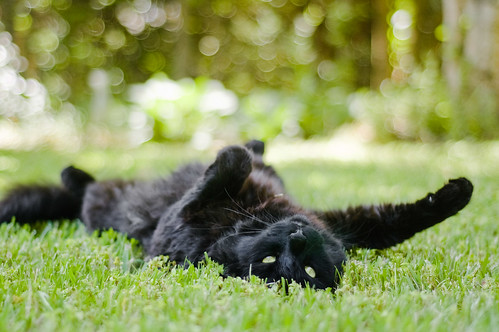 Coat / Build: Long-hair, curly on the belly. Built like a bear.

Backstory: Scruffy showed up some years ago at Sue and Charlie’s house. Thinking nothing of it (strays are pretty common here) they took him in, unable to believe such a healthy, loving cat didn’t have a home. One day Scruffy disappeared and the loss of his neediness was mourned. Two girls who lived down the street came by to say that Scruffy was their cat, whom they had named “OJ” and thought had died. Right before the girls and their family went on a road trip, Scruffy had gotten sprayed by a skunk, so they put him outside. Being an indoor cat all his life, Scruffy ran away to the Miller-Born’s house, which is a veritable cat paradise. While walking by one day, the girls noticed Scruffy and took him home, and that’s when he had disappeared. However, Scruffy had a mind of his own, and he eventually wandered back to the Miller-Borns where the girls decided to let him stay.

Dislikes: Other cats. Being outside. Being ignored.

Favorite Place to Nap: In the rafters of the garage.

Claim to Fame: Having Roman pillars for arms and legs. Being incredibly good-looking for his age.

Downfall: Meowing at the back door, window, front door, side door and garage door all day, every day.

I think this is really an excellent shot,
please consider posting it in our group
Thank you ! =(^.^)=

How did he get sprayed by a skunk if he was initially an indoor cat.
Those girls were awfully nice. I could never give away my cat; I’d miss him too much.
Beautiful cat and beautiful photographs, as always! I love the photo of the cat looking up through the crack in the door.

Oh, man. I am so jealous of all the cattage at your household! This makes me want to do some cat files, too. On my cats and my mom’s. I’d need to find more pictures of my mom’s cats, though!

omg you have no idea how much i love cat files. it’s currently 6am & i’m sitting in my boyfriend’s parent’s kitchen reading this out loud to the bf while he eats his cereal. we die at every word. love this scruff.

i wish you knew my kitties so you could do them!!

Aw, I know! I kind of have fantasies of traveling the country, documenting people’s cats so I can do these posts forever. Maybe I’ll open up some guest spots when I run out of material of my own :)

Right-o…but I don’t think he was sprayed by a skunk. How could he be if he was…always an indoor cat…OHHH! No wonder he didn’t like it at his old home…too many indoor skunks! If you thought Tom smelled bad…

I know, the story sounds a little fishy (skunky?) to me, too, but don’t blame me. I’m just the reporter!

And seriously? No cat has ever smelled worse than Tom. Ever. Not one or even one HUNDRED skunks could change that! Have you ever tried to sleep next to Tom? Impossible!

these files are great! I’m totally into them.

Sophisticate art; this is beautiful & inspired a million flickr members . Such a great artistic eyes to captured it. I pleasure and honor to give you the awards; feel free to display to My amazing groups;

SPLENDID PHOTO.. YOUR PHOTO WINS
THE BEST IN THE INSPIRE GROUP

INSPIRE Invite ONLY
You are INVITED to display this wonderful photo
in the INSPIRE Pool, and give 2 awards to your best friends..

Honor to invite you to be happy at:-
SPLENDID PHOTO..YOUR PHOTO IS
INVITED TO MY SPECIAL GALLERY

Have a nice day:)

Aww, he must really love the garden!

Awwww! I know I just said Scruff was too needy for me, but sometimes I wish I felt like Felix needed me at all! That cat is way too independent.

Oh the bokeh is incredible.

Speaking of needy, Sakura is walking around meowing for no reason as I type this.

This is really a Furry CAT Friend.
Furry Friends

Thank you for adding this great capture to this group!

Hi, I’m an admin for a group called Cat Bokeh, and we’d love to have this added to the group!

this is so very cute.

Separated at birth! Hehe, but sadly Scruffers doesn’t have that awesome patch of chest hair that yours does ;)

Our cats must be related! Or you borrow my cat occasionally for photos! 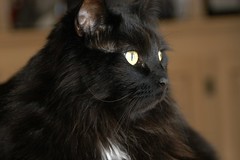 Thanks, Emma! We love black cats, too. His name is actually Scruffy, but Scruffers serves as our term of endearment.

Is that really his name? So cute, I love black kitties!