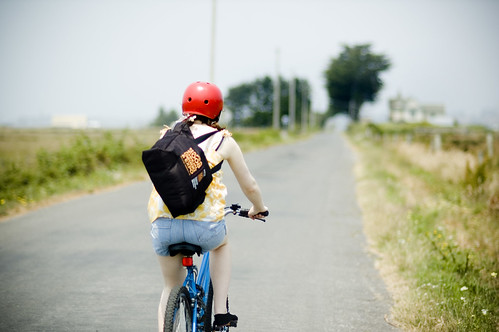 The other day I rode to the beach– what else is new, right? :) This time I rode with Charissa and she took me on a route I’d never been on before! Normally, I ride up Alliance, over Spear and then cross over to Upper Bay Road. But since Charissa hadn’t been on a bike in over a year she was terrified of riding through that much city traffic, so we went straight through 11th to Jane’s Road. 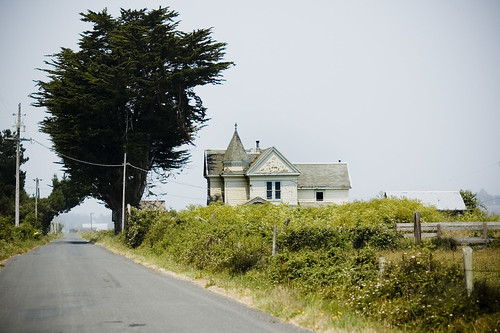 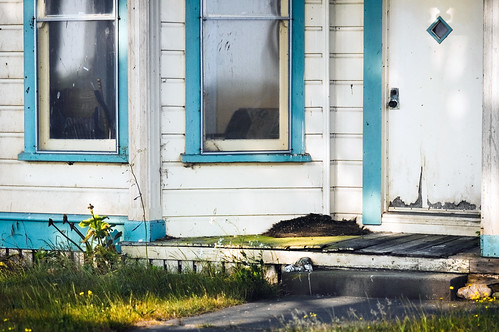 There were lots of sights to see that I didn’t even know existed. Most notably this very creepy ‘abandoned’ Victorian home. There was a good deal of crusty looking furniture, plus a guitar and Casio keyboard hooked up in the living room. We assumed someone had turned it into a college house.

I wanted to take loads more photos of the place, but my imagination started going wild and I became very creeped out, very fast! Everytime I held the viewfinder to my eye I thought I’d see some decrepit zombie-woman with a widow’s peak and dusty old 17th century dress peering out of the window. 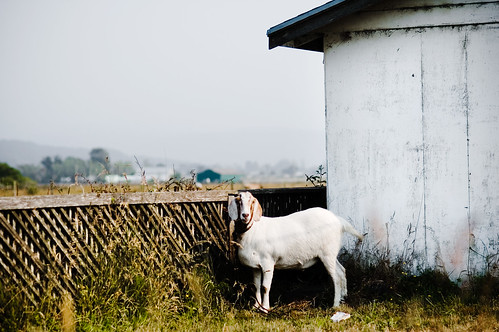 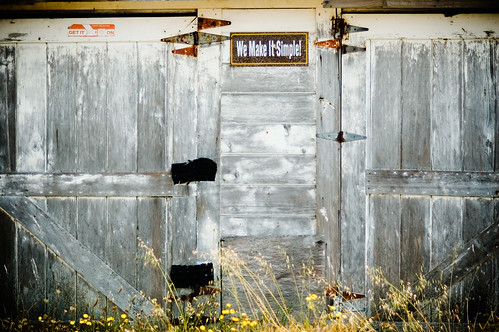 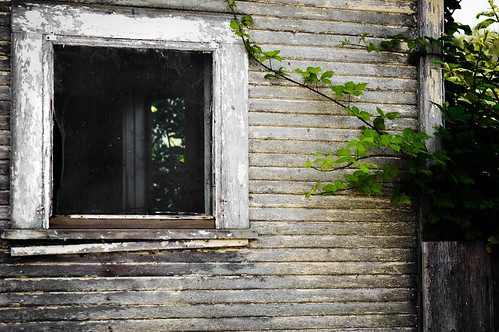 One thing I love about riding out to the Bottoms is how most everything is so time-ravaged. I’m sad that, being a girl, I went through the typical “take photos of your feet” phase while all the boys were taking their cameras through the “explore abandoned buildings” phase. I’m trying to make up for lost time, but I am a total, utter chicken, so it will be a long time before I get shots of anything remotely interior! 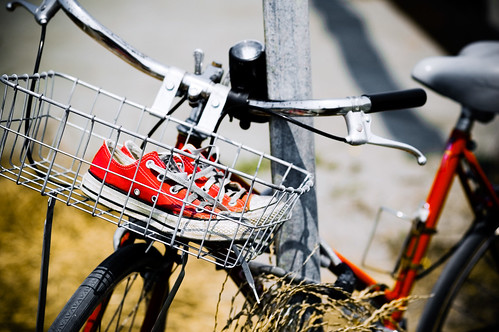 When we finally got to the beach we locked our bikes up to some sign posts. I’ve been leaving my shoes in the basket of my bike and relying on good faith that no one will steal them. Charissa, on the other hand, looped her bike lock through her shoes! In her defense, they were extremely cute. 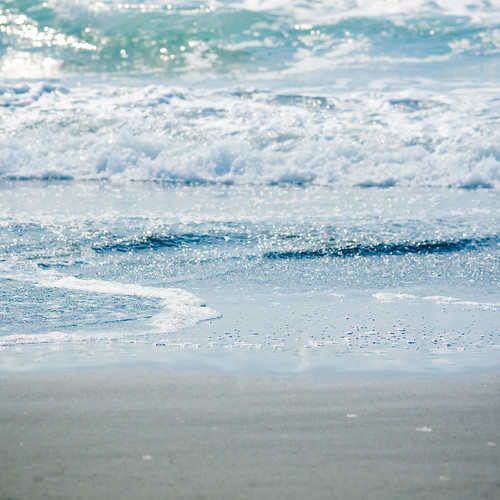 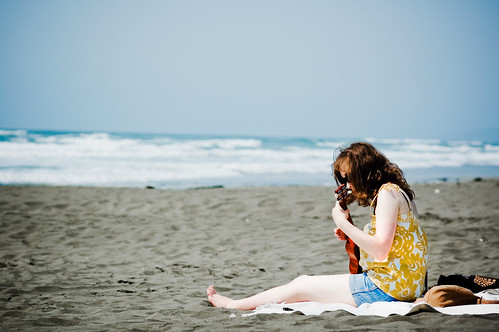 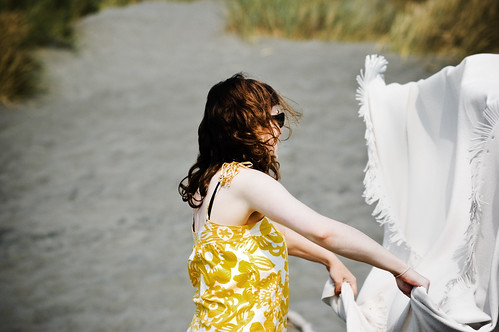 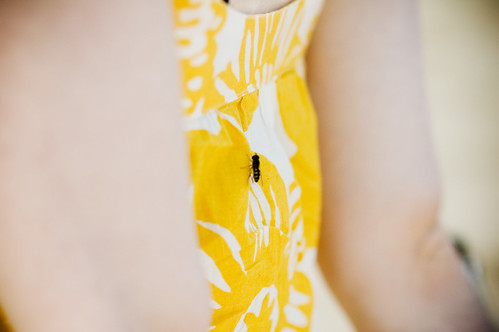 I’m not sure how long we were at the beach, but it was definitely long enough for me to get some color on my legs! I should’ve worn shorter shorts, though, because my jean bermudas left a line that makes me look like I’m wearing sunburn-colored knee highs. VERY classy, hah!

It was a pretty leisurely afternoon, digging our feet into the sand and watching the tide come in. Charissa played some tunes on her ukelele and I took photos of everything in sight (natch). We certainly enjoyed ourselves– and others, as it was pretty crowded. To be expected on such a gorgeous day! There was also this bee that wouldn’t leave us alone. It wasn’t a mean bee, though, and Charissa seemed to develop quite the friendship with it! 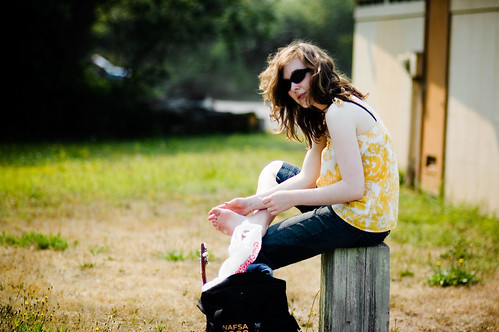 When it was time to go home we swung by the boat dock to use the restrooms. I talked to a guy who was letting his dogs run up and down the ramp into the river– he had a golden retriever that was 110 lbs! Incredibly huge pup. Unfortunately, they were too excited by the prospect of guzzling river water and getting their owner drenched to get any good shots of them.

And, if you can believe it, I actually toned this post down a bit. There are at least eleventy million other photos of this particular bike adventure at my Flickr!

I love the mood in your photo – well done!

Hi, I’m an admin for a group called Back_road_bike, and we’d love to have this added to the group!

i love that the shoes and the bike are the same color, may be random, but i think it’s what makes it for me … :)

this a one very sweet shot… love the blues

Ew, you are so right. I want to assure you that it’s just a pile of dirt, but I never got close enough to the porch to know for sure. :x

so that thing on the porch totally looks like a dead cat. and in the left window–thought that really WAS the old zombie woman you wrote about. you know, from a certain angle anyway.

i like this a lot! great color on the trim

such nice colors! i love your editing!

What great colors, many shades of the same hue, great eye to see this!!

good–i’ll make sure my faving finger is all warmed up! :)

bellissima
Please add this beautiful photo to From Dream!!!!!!!
FROM DREAM

Thanks, Meg! I think I got a little vignette crazy on this set of photos but, oh well. :) More to come after I shower up.

this is awesome! love this shot.

You should come to Arcata! It seems like they’re everywhere…

nice feel on the wood fencing. i want to touch it.